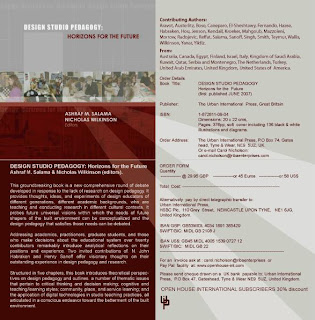 Excerpts from the Review by Nikos A. Salingaros

This is a collection of essays by twenty-six authors, collected into thematic sections, with an introduction to each section written by the editors (who also contribute their own individual essays for this book). Ashraf Salama is well known in Architectural Education from his important but unjustly neglected book “New Trends in Architectural Education: Designing the Design Studio” (1995). The keynote essays in this volume are written by N. John Habraken and by Henry Sanoff, two individuals of international prominence. This book attempts to re-orient architectural education away from an oftentimes non-adaptive studio method. Actually, the criticism is for the specific studio method instituted in the Bauhaus by Walter Gropius, then applied throughout the world after that radical break with the Beaux-Arts method of education. As accurately expressed in the introductory essay by Salama and Wilkinson: “Research indicates that designers in academia still distance themselves from the real world, still barricade themselves from real human problems, while missing the opportunity to learn from the richness and depth of human experience.” (Page 4). The reviewer agrees totally with this statement, and applauds the aim of bringing together these essays in an effort to find new directions for architectural education………."

"…………The authors of this book’s essays have all tried innovative methods of teaching architecture, and present their experiences here. All of these are valuable lessons for reform. Due to the large number of contributors, the results touch a variety of topics, and some are more interesting (to the reviewer) than others. That is inevitable, since suggestions and experiments at reforming the studio go in many different directions. Nevertheless, the great advantage of this book is its geographical span: a worldwide participation that breaks out of the usual US-dominated discussion of such matters. Those who participate in the US architectural arena, and those whose images of cutting-edge architecture are narrowly defined by the fashion of the moment, tend to forget that the vast majority of building is carried out elsewhere in the world. It is gratifying to see true innovation triggered by professionals and educators who are truly rooted in the rest of the world. There has to be a mutual respect to genuinely affect any degree of change in the way we perceive built form. One of the best ways to begin this is to reach out globally in this evolution. The entire world’s architectural heritage provides the basis for a return to real architecture: we need to harness a person’s sense of self, identity, and place through innovations in architectural studio pedagogy. ……."

"…………Finally, the efforts of the editors are to be warmly applauded, in trying to tie together all the disparate essays into a coherent book. This book is recommended to all who actually teach architecture, and to those who would like to see today’s architecture graduates able to design more adaptive buildings………………."

Architecture-Urbanism is developed and maintained by Ashraf Salama. For more information on his books, publications, research, consulting, and teaching, explore different sections of this site or click here or click here 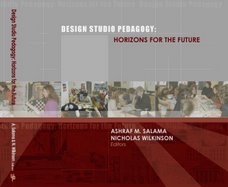 Links to Selected Pages in this Site (Architecture-Urbanism)

Links to Selected Pages in this Site by Category (Architecture-Urbanism)